Eventually our 2022 season started at the Brands Hatch GP circuit joining the Bernie's V8s series in order to maximise the grid no's on the longer layout. 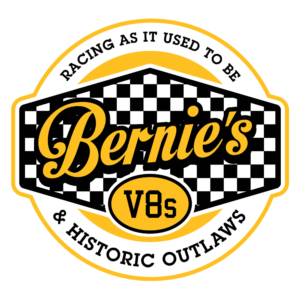 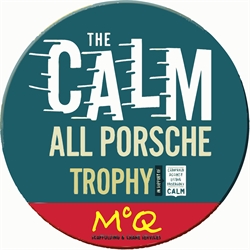 We setup early on Friday night given an early qualifying slot.  At the last minute Michael couldn't make the weekend so our 2-driver approach change to a single driver for both races of the weekend.
I was randomly selected for scrutineering this weekend which we passed fine as usual.  I had to hurry them along a little so I could head to the assembly area as early as possible.  With 46 cars (the maximum grid) it would be hard to get a clear lap despite the longer GP layout so I wanted to be in the first few cars out 8on track.
After a couple of warmup laps I posted a decent time, but thereafter kept catching cars in front losing any time delta I had.   I noticed the clock had just under two minutes of the session remaining so was able to take a slower lap, cool tyres and create a 5s gap to the cars in front for a final go.  I improved by 1s (1m48)which helped me qualify p10 overall.  I felt there was loads more time to be gained and suggested afterwards a 1m46 would be possible. 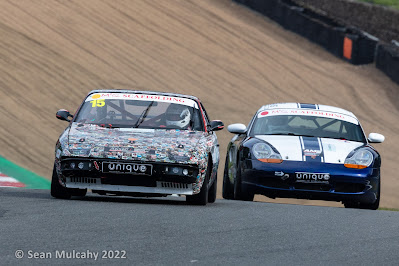 There was a long gap between qualifying and the race so we took the opportunity to get the car up on jack stands and re-check all the bolts from the recent gearbox change.  We also  replaced the front engine mount with a poly-bushed version to reduce movement of the engine under hard cornering which can affect the balance of the car.

Race 1 - Saturday:
Rolling starts are tricky but with clear instructions to hold speed until the lights go out I was tight to the car in front, holding 2nd gear and got away well and defended my position round the first few corners - a first for a while!
As anticipated someone went off immediately so the safety car was out before we'd even done half a lap. 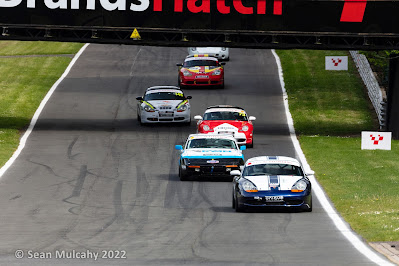 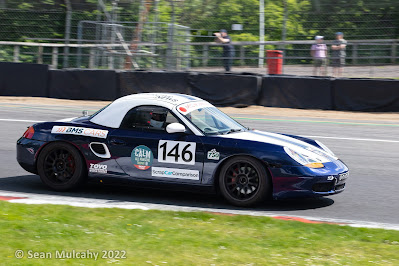 They cleared it very quickly and I was racing again holding position behind faster V8 TVRs and with a Porsche 944 following me attentively.  I got faster each lap (3s better than qualifying beating my 1m46 prediction by half a second) and managed to put a V8 mustang in between us mid race. In the final few laps another TVR passed me on the long straight. I was on the limit trying to hold on, so with tyres starting to struggle, I decided not to push it and follow safely to finish first of the CALM All Porsche cars. 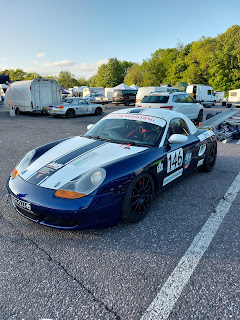 A great drive and result with really consistent lap times, which also earned the 'drive of the day award' at the evening presentations. 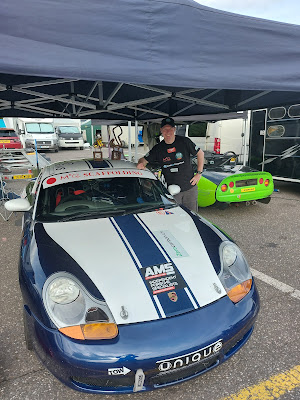 Race 2 - Sunday:
The temperature was much hotter on Sunday so we took a little air out of tyres but otherwise left the car setup alone.   Pre-race there was a track parade, Le-Mans style before we formed up behind the safety car for our green flag lap. 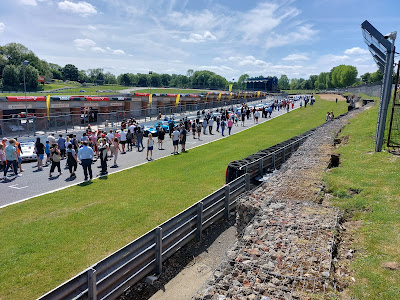 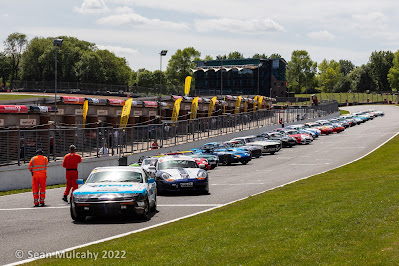 I started p4 after hearing overnight that the first 12 cars would be reversed a-la BTCC.  I got away well although had to correct a big slide round druids (cold tyres) but a V8 squeezed me wide going into the back straight. I lost loads of momentum and 3 more screamed by which was frustrating. 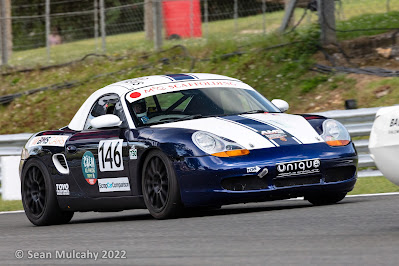 I was doing ok but my lap times were poor and a wheel on the dirt turning into Graham Hill bend, missing the apex,  allowed 2 more V8s to use their bhp to buzz past followed a Porsche Boxster.

After another mistake out-braking myself into the penultimate corner I was able to re-group as the saftey car came out again.  After the restart, I settled into a rythym and had a great battle with a pair of Porsche Boxsters dicing for position over the last few laps.  All three cars posted our fasted laps of the race as we pushed each other to the limit and more like my Saturday pace. 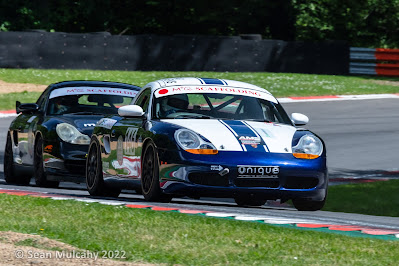 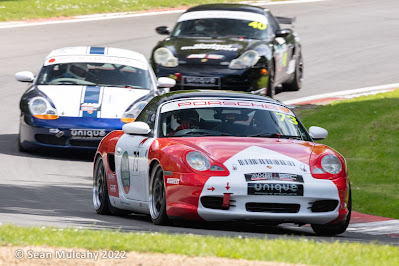 I finished 14th overall and P4 in class although the Boxster in front had a penalty for 3x track limit violations promoting me on the official results sheet.

After a long while struggling with handling of the car this weekend it felt great (on Saturday at least).  This was also the first time we had run with some passenger seat ballast.  Since removing the rear wing and splitter we found ourselves a few kg underweight to meet the 200bhp/ton class limit.  So we have  added 8kg of aluminium 6mm plates bolted to the seat mounts.  This probably helps balance left-to-right weight distribution a little which we usually offset by setting ride height with driver in place.

Sunday, the heat affected me and the car and I didn't get into the groove of the day before until late on in the race.  However we got round without any damage which is a feature of the CALM series to be proud of. As usual a great bunch of people to race with.

Over 6 months ago, we started the winter overhaul of the car before the turn of the year and the coldest weather.
Our first issue to solve was that our fuel gauge had stopped reading accurately.  This was a problem when we felt we were low on fuel at the Birkett Relay race, so went to add more and the tank was full (reading just over half on the gauge). 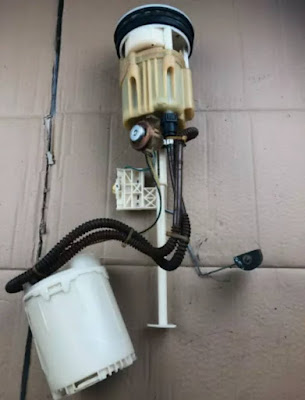 After looking and ultimately not finding any better aftermarket solutions we remove the sender and pump from the tank and repaired the Porsche/Bosch unit ourselves and it now reads accurately.
Next we did the usual maintenance of brake discs, pads and changing the fluid.  We also added slightly larger spacers at the rear. 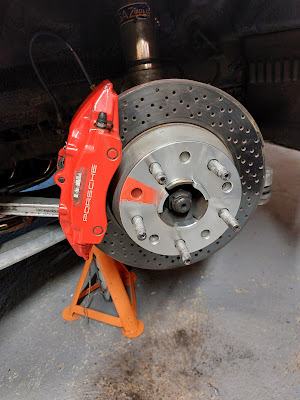 We also replaced the earth and positive cables in the engine bay which run from a central junction point to the alternator and starter motor.  These are known weak point causing hot start issues. A problem if you stall mid race.
Our other major work was to identify and resolve the poor handling I had in the Birkett Relay race at Silverstone.  The rear of the car was breaking traction into high speed corners since we removed the rear wing and front splitter.
After a couple of months of looking, I picked up a genuine used bumper -  these are becoming both rare and ever more expensive. Our emergency spare that has seen better days can be retired back to the loft.
In our first pre-season track day in February we picked up an oil leak on the top of the engine.  It was easily rectified by reconnecting the oil filler tube properly which I had taken off when doing the re-wiring work.
We reduced the ride height all round - there is no real limit on this under the Calm Porsche regulations.  We lowered it more at the back to reduce the amount of rake.   All changes are designed to increase rear grip.  Whilst doing this I found the main chassis x-member had come loose (1 bolt completely missing!) so the engine was moving left to right though corners which wouldn't have helped! 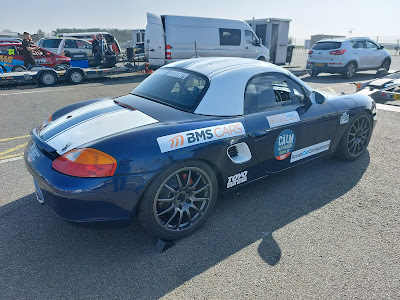 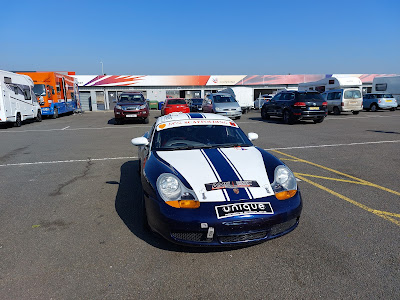 We also experimented with using the rear spoiler of the Boxster deciding to keep it slightly raised on balance. Our data traces show some big differences between running the aero kit vs not.  Without - the car accelerates faster on the longer straights to slightly higher max speed.  However with aero any corner over 50mph can be taken much faster resulting in higher mid corner and corner exit speeds which is where lap time was gained.
This year the Motorsport UK regulations are aligning with the FIA international standards for fire extinguishers. Ours was nearly end-of-life anyway, but the new design required replacement of the plastic piping with larger diameter aluminium piping and increased the no. and size of spray nozzles.  All the wiring and trigger buttons were also replaced with the kit. 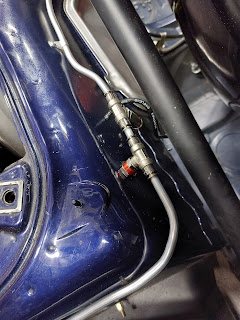 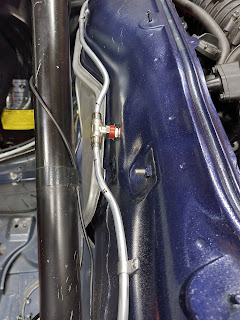 During the track day we also noticed a crunching into 3rd gear had developed which is probably a worn synchromesh.  At some point this will break completely so we needed to address it.  The Boxster S 6-speed gearbox is incredibly expensive to repair - mostly due to the cost of special tools needed and any gear rings and bearings.  There are few parts shared with other makes so no cost saving measures. 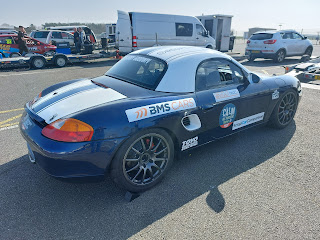 I took a gamble and picked up a used 60K miles gearbox and we spent the Easter weekend replacing it, skipping the first race event of the season.   The process is pretty straightforward unbolting the drive shafts, chassis supports and exhaust, before removing the gearbox itself.  Putting the replacement in was easier than when we replaced the engine knowing we'd have to line the splines up and pull the gearbox the last inch by sample doing up the 8 differently sized bolts! 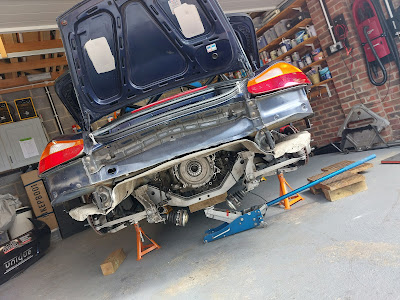 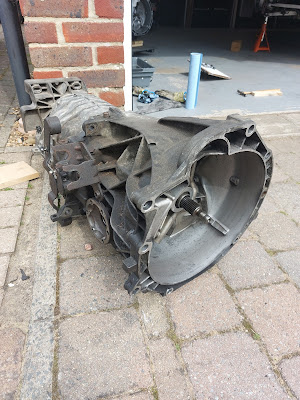 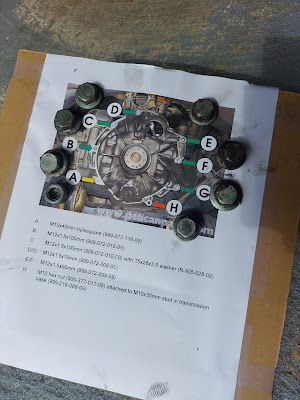 Before we race we did another track day at Snetterton with Michael driving most of the day and getting plenty of dry and wet laps in to boost confidence.
Posted by Garry