The engine runs, but is knocking badly.  Regardless of whether we rebuild it, replace with new or used it has to come out.  Then we’ll take it apart and inspect the internals before deciding on which route to take.

We have done everything on the car ourselves bar welding the rollcage and more recently pressing new rear wheel bearings.  At lot of the prep work is jobs we have previously done. Because of this we really want to do this ourselves and are absolutely positive we can.

I compliled two checklists of what to remove, disconnect, separate etc and then cross checked them so nothing is missed.  Neither are comprehensive and it now totals over 50 steps.  The two sources I used were the Jet 1 YouTube video series and Pelican Parts engine removal guide.  The latter is more of a guide of guides as most of the details is in smaller jobs they have covered separately.

The principle of labelling everything, taking notes and photos cannot be under estimated. It is likely to be months between removal and refitting so there is no way of remembering what went where or connected to what when we come to refit it.

We don’t have a lift or an engine crane so the general approach is to have the front of the car raised on std car ramps ramps and the back jacked up at an angle using jack stands. The gearbox will come off first and then the engine lowered on a jack onto a trolley and pulled out under the rear of the car.  Simple? 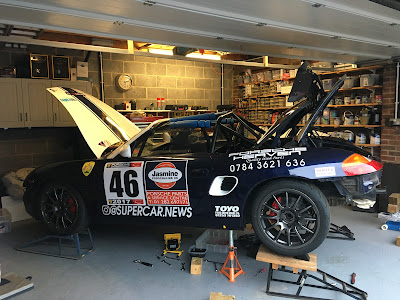 With the car on the ground we started disconnecting everything at the top of the engine which connects to the body, this included the air intake, ecu wiring loom, oil filler and air pump pipes.  For road cars a major headache is the air conditioning lines and compressor so we avoided that luckily.

Getting the car up on ramps and jack stands allowed more space underneath. Rear bumper and exhaust were previously removed so we cracked on with chassis braces, anti roll bar, cats and drive shafts - all of which we have removed before so no stuck bolts to contend with.

Under the middle of the car we drained the engine oil, coolant and power steering fluid removing all the coolant flexible pipes at the same time.  Tiny metallic particles were in the oil which isn’t a good sign. 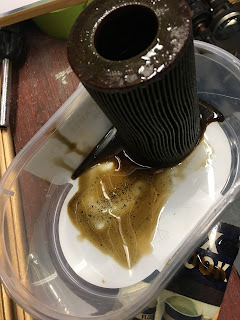 As we don’t have and engine lift or cradle to drop the engine onto we decided to remove the gearbox first to reduce the weight and sheer size of the engine.  Several of the bolts were seized so it took hours to remove and some of the engine block threads will need to be repaired as a result. 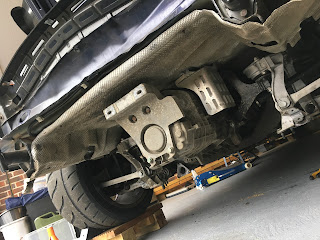 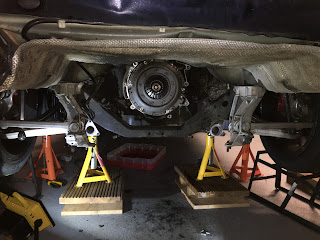 After stopping that evening we came back to the car the next morning and removed further weight in the flywheel.  The only tool we didn’t have was a large torx socket for the flywheel bolts - so a quick trip to Halfords was in order. Now with the engine supported on the large jack the final front engine mount was removed and it lowered slowly to the floor.  The car ideally would have been higher still to pull the engine out, but we manged by rotating it on the jack by 90 degrees and pulling it out front under the back of car sideways. 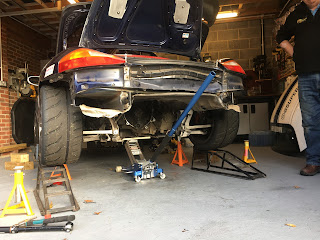 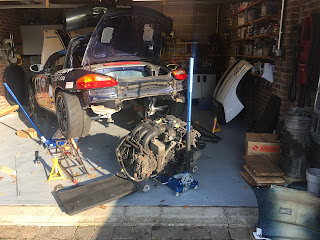