After around 30 race weekends, plus track days and testing in between the internal bearings called time on the constant high rpm and back acceleration that is involved for a competitive race engine.

A hour earlier we were mulling over a good but slightly perplexing qualifying. I had gone 2 seconds a lap faster than ever before around the Donington Park national circuit, but somehow ended up 10th on the grid.  With the benefit of testing (2 days for some) everyone else just went 2.5 seconds faster!

The temperature was rising as the afternoon kicked in so we needed to reduce tyre pressures and the rear end was a little unstable under braking in qualifying so a tweak of the suspension was needed. Nothing else to report other than looking forwards to a great race, which was setup with 5 cars capable of winning and another similar group behind.

I leave the engine running in the holding area to ensure it’s fully up to temperature and we head out on the green flag lap. It’s a little slower than usual and I’m weary I have new tyres which will come up to temp quickly.

I reacted quickly as the red lights went out, but the car in front didn’t.  Jinking to the right I realised there was only half a car width of race track and didn’t fancy getting on the damp grass under full acceleration so backed off. 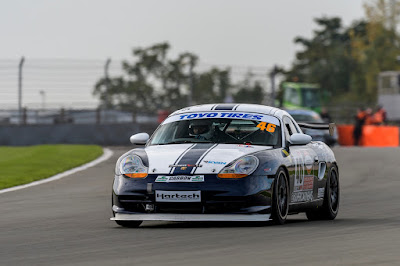 The car behind jinked left  making several places and went on finished o the podium.   Two cars tangled and went off first lap and the top 10 was pretty close through the first 3 laps with me watching at the back of the pack.  It started to stretch out over the next few laps but I was nicely in touch with the two cars in front coming right onto them every time they made any mistke or held each other up.  Coming down the fast final straight I felt a slight rumble fro the engine under braking and then there an almighty vibration, shaking the car as I tried to accelerate out of  the last corner. I'd never had an engine go on me before, but it was obvious our race was over.   I switched it off immediately wanting to avoid as much internal damage as possible and pulling off to a safe place at the side.
As the race went on no less than four additional cars broke down or pulled off with mechanical issues.

In seven race seasons, this is only the second time that we have had to pack up early, with no hope of running in the later races. But as frustrating as it feels, our engine has never let us down and been far more reliable and performant than many others since we started.