This year the championship has a dedicated co-ordinator we were greeted on Friday evening with an allocated garage and somewhere to park the tow car and trailer which is a nice change.

Saturday am we were first on track with an unofficial practice session.  After about 20 mins of settings some good laps, we unsuccessfully attempted a pit stop to change wheels and scrub in a new set of tyres running out of time in the end.  This mean't that in qualifying I needed to go easy for the first 10 minutes to run the tyres in instead.  A quick pit stop to reset tyre pressures left me precious little time to set a fast lap towards the end of the session.   I got held up on my first real flying lap which left me last in class with just a minute left of the session.  I did then manage a good lap with cooperation from a 924 driver doing the same and we avoided holding each other up - just about.  This bumped me 5th on the grid - a really good result.

The new aero package the Boxster runs makes a considerable difference at Snetterton.  A good example is Turn 1 which is now taken without changing down, just a dab of brake, resulting in a 10mph corner speed increase.
The temperature was scorching for the mid afternoon race and I started pretty well. On lap 3 I was following closely into the hairpin and didn't quite manage my braking properly, damaging my front bumper. However at the same time I got hit hard from behind. I continued, trying to regroup and mount a challenge on the places  but the exhaust was dislodged and I limped noisily home in 7th a way off the pace by the end.

After inspecting the damage front (split bumper) and rear (split bumper, broken exhaust mount and inner wing) we headed home for the night, vowing to return early the next morning with the right tools and plenty of gaffer tape to repair the car. 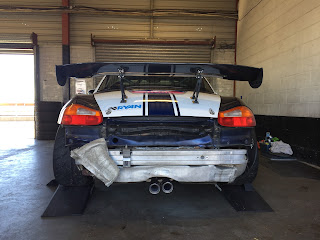 Race 2 - Sunday AM
I switched back to my worn tyres as we felt new ones were overheating too easily with their full tread and had a good start and race, running with a group fighting for p5.  Mid way though I felt a problem with the rear of the car and saw my bumper trailing dangerously round to one side. I had no option really - but to pit, flagging down Tony our tyre man, from the pit wall, who removed it and sent me back on my way. 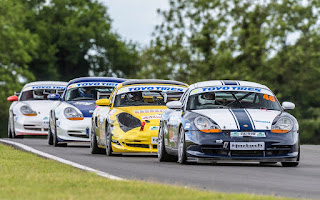 Race 3 - Sunday PM
My result from race two put me on the front row for race 3 - the traditional reverse grid finale to the weekend.   I made mistakes round both the first two hairpin corners on lap one and dropped almost to the back of the class.  The racing is pretty brutal at times, as one car gets past two more will force their way through any gap you leave, intentional or not.  Several cars went wide at the end of the lap and I had  a reprieve, getting back up with the lead cars.  However a failed-over take move and more mistakes left me back in 7th again.   As the race went on I was unable to make an impression on the group in front over the last few laps.  With the front tyre rubbing on a damagd front wing and a rumbling from the rear (which we later found was two broken wheel studs) I was lucky to finish.

Overall we didn't perform as well as we could in the 3 races.  I was definitely a bit race rusty behind the wheel, and the damage we picked up in race 1, ultimately effected race 2 and 3 and will take some time to fix up.
Posted by Garry

This year we've had a pretty late start to the season.  We are joining the series at the 4th round of 8 at Snetterton. 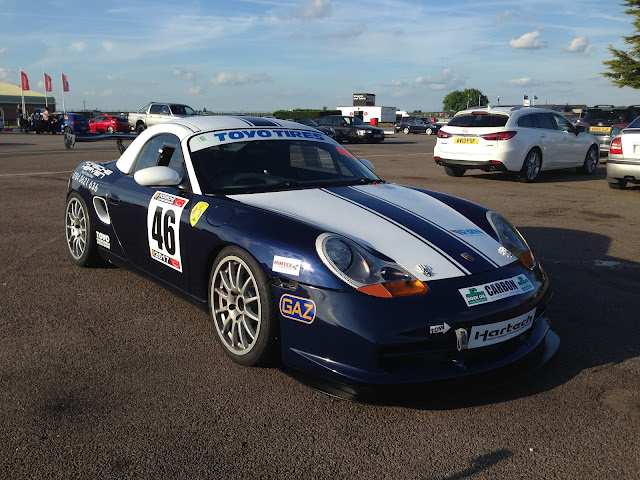 We had aimed to start in April, but had to abandon our shakedown test track day following winter maintenance.   As soon as we hit the track at speed, it immediately became apparent we'd got significant issues with the drive train.   Every time we went back it it got worse and we went home at lunchtime scratching our heads, unable to work out what was wrong.

It took us several weeks to chase down the root cause eventually replacing driveshafts, suspension arms and wheel bearings at the rear of the car. 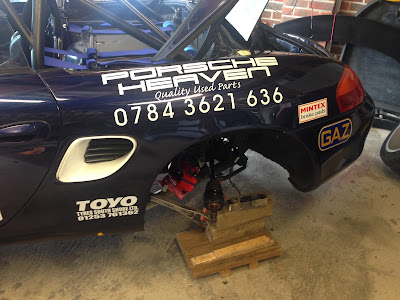 At the same time we fitted the new Boxster Aero package. This consists of a GT3 fibreglass front bumper, with a front splitter attached to increase downforce.   The rear of the car now sports are large GT wing providing increased rear downforce to balance the front end. 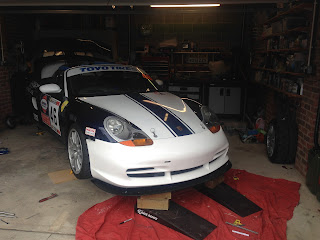 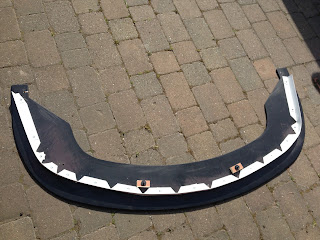 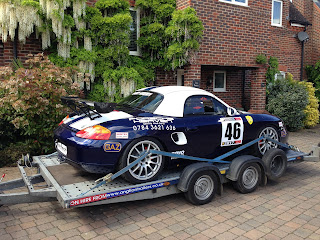 From the races to date it is clear the Aero package is having an effect as laps time are generally 1-2 seconds faster as a result, and drivers report being able to run faster through the longer corners, getting on the throttle earlier. 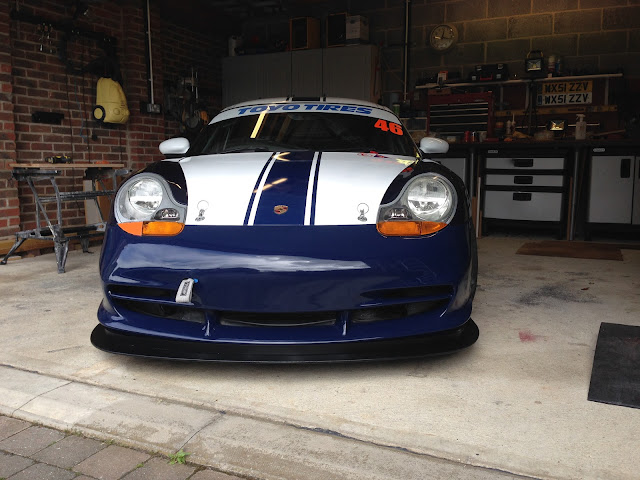