So we though our winter maintenance was over!  Wrong!

We had spent a day readying the car for our traditional pre-season shakedown track day. Second seat bolted in, ride height, camber and alignment checks were completed. The rear right needed some adjustment and we found that the adjuster bolt had seized in the toe arm and refused to budge.

As I was looking for a way to free it I noticed a large crack in the sub-frame which holds the suspension and gearbox to the chassis, just by the camber adjuster. 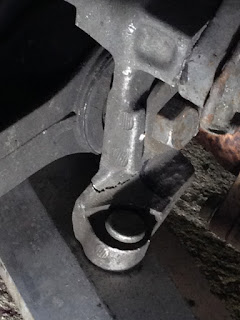 So wind forwards a week and we'd ordered a used sub-frame and a new toe link arm, since that was still seized into the sub-frame.   We're getting reasonably confident with tackling pretty big jobs these days, and whilst a lot of bolts had to be removed, swapping over the sub-frames only took a couple of hours. 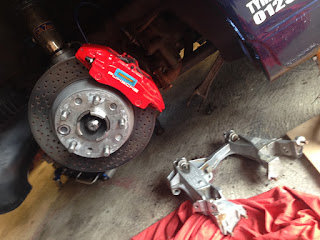 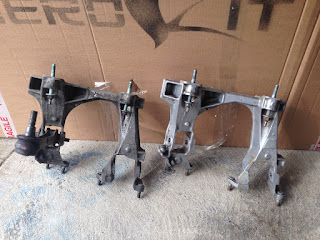 The camber adjustment was set to maximum and the car dropped back into its wheels to finish the rear left toe alignment.
Posted by Garry