An early bath at Snetterton

The 2016 season opener at Snetterton circuit in Norfolk started well as I put my learning from our shakedown test Into practice posting the 5th fastest time in qualifying, nearly 1.5s improvement over our shakedown trackday time.

This year we've switched to an SJCAM 4000 camera which is fixed using go-pro compatible mounts on the rollcage.  It has much better video & sound than our previous camera, and also still has a "car" mode which automatically starts recording once the ignition is on via a 12v to usb power lead. No forgetting to turn it on, or flat batteries! 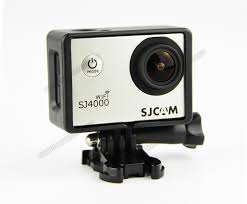 You can see from my lap timer (behind the gear stick) how the lap timer unfolds vs. my best previous lap.

The display is a Chinese Android 5" smartphone running the Racechrono app.

The top left of the screen is the best lap so far, and the bottom right the split time which is constantly updated. Green is faster, Red slower.  You can see I'm checking on the straights so know to take the final corner steady (no mistakes) and bank the new fastest lap over the finish line. 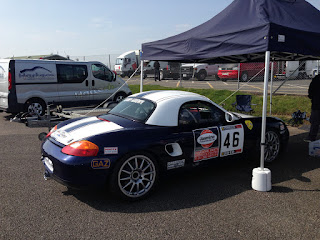 The sun was out and it was a glorious spring day. Learning a lesson from last year, we made no changes to setup, simply refuelled and went out for race 1 later in the afternoon.   Tyre pressures were reduced though as they got a bit too hot (32psi) during qualifying. 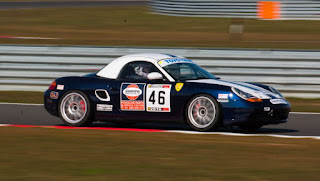 On the grid the car in front stalled immediately the lights went out and I had to take swift action to dart around the stranded car.  Avoiding it and the pit wall was a feat in itself.  Going into the first corner I was a couple of places down as a result l, but confident of getting them back.

As the pace picked up I closed on the 5th place car but overcooked it into the long right hand final turn.  Whilst I sorted out the oversteer  two cars sneaked past on the inside - More work to do now I thought to myself!

Over the next few laps I passed the first car several times, but never quite got into the right position to take the (faster in a straight line 987 model) in front.  Everytime I got close, I stopped defending and allowed the car behind back passed.  This cycle repeated for a while.

Going into the the fast (70mph) left Hamilton corner the car in front suddenly lost the back end and slewed sideways across the track.  I've had this before - but I was so close behind this time. Jumping on my brakes bought some thinking time to decide to go left or right around the spinner.   As I went right into the grass the car spun backwards into my front left corner.

I immediately knew it was race over, with water pouring the the front radiator.  Sadly for everyone the other car was standard on the edge of the circuit causing the red flags to come out.

On getting back to the pits it became obvious our weekend was over too.   Damage was extensive to the front left wing, bumper, radiator, suspension and steering.   Offers of help were received but it would be a long job and we simply could not afford to replace all the parts at the track. 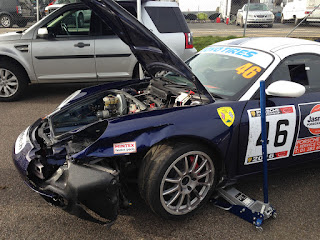 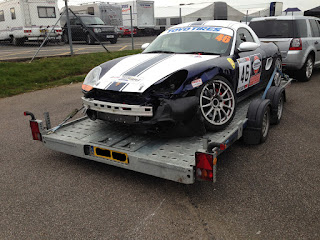 For the first time ever we manhandled the car onto our trailer and returned home for an early bath.

** Update - A day later, the car is already stripped and we have a few weeks to source cheap second hand or OEM parts to repair it for the next round at Rockingham in mid May.