In seven days time well be taking part in the first BRSCC Porsche Championship meeting of the year, being held at the Snetterton circuit in Norfolk.

We haven't raced there for three years, so booked a standard MSV track day to shakedown the car, get my eye in on the circuit and let some family have a go at the same time.

The MSV instructors read the riot act in the briefing, as recent events had been treated like test days (overtaking anywhere) and not track days, where novices and experienced drivers need to co-exist.

It worked as track etiquette was good and the mix of classics, road cars, sports and race cars got on fine.  The weather was bright, dry and about 10 degrees.  Hopefully it will be the same come race day.

In the morning we did a few runs focused on checking the reliability of the car.  The only issue we found was a loose engine cover, so all went well.  Handling was good with our guess at the setup.  No particular oversteer or understeer issues - but the front end was bouncing up and down a bit too much on corner exits. 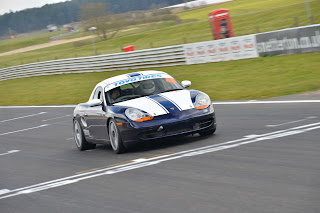 The trick with open pit lane format days is to be on track when everyone else isn't.  A couple of times we noticed the track was full, with cars queueing in the pit lane.  This meant that in about 15 mins it would be empty as they all come in to cool down - time for us to head out then!

In the afternoon we experimented with setup, corner techniques and gear choices.  The track was far less busy too. 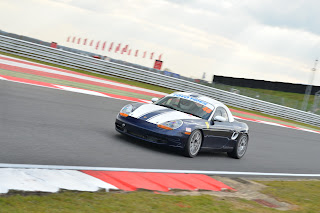 Overall it was a really successful day, without incident, and I went faster than ever.