Whilst the rest of the UK headed for Silverstone for the F1, we went further north to Donington Park in the East Midlands.

We were racing on the undercard of the FIA Masters Historic racing series, which brought out some mighty sports cars from the 60's and 70's. 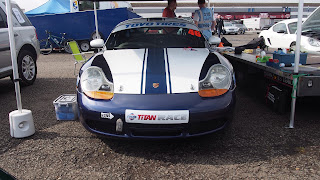 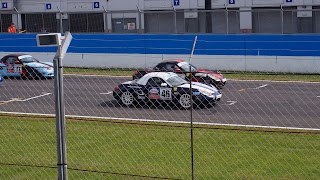 Our car was pretty well setup following our track day last month.  The only snag for qualifying was that we'd never driven the full GP circuit layout before.  A last minute hitch with my gps timer mean't I had no live lap timing. But I quickly decided that was irrelevant as nobody knew what a good lap time was on the new to us layout.

I did my best to string a few fast laps together, with brake and tyre cooling laps between and to learn a path round the tricky downhill hairpin (Melbourne loop) and the frustrating off camber hairpin (Goddards) back onto the main straight.
A big thumbs up greeted me in the pit lane - I had qualified 5th fastest, a best ever, despite me thinking there was still bucket loads of time to be gained.

I had felt the car was still tending to oversteer so for race 1 I made a small suspension adjustment, which I immediatly regretted.  I lost a couple of places off the line, which wasn't a problem, but later in the race went wide onto the grass out of the first turn ripping off a front wheel arch liner.   Braking and cornering seemed unstable after that and I struggled to keep up with the front cars, making a fair few mistakes and finishing 8th.
We quickly found the wheel arch backets were fouling the front wheel and I was lucky not to puncture the tyre. With no spares we removed the other side wheel arch liner and both went in the skip!  We'll run without them from now on. I also reversed that suspension tweek out and in future will stick with a setup which is obviousbly good.

Starting 8th on the outside is a good place to manage the inevitable concertina into turn 1.  I haven't had great starts recently but go away fine keeping up with the main pack of cars and overtaking two places within the first couple of laps.

I was reeling in the battle for 3rd-5th but when they tangled I had to take to the grass again to avoid the spinning car and that let them get away.

I had my own challenge with a car behind steadily gaining on me on the last lap. I let a last ditch lunge up the inside on the final corner go and cut back on the inside to win the drag race to the line.  Great, fair racing with both drivers leaving each other room to avoid any sort of contact.

Race 3 is always a reverse grid, and is usually great fun as there is an opportunity to get near the front and try to hang on as the front runners try to come through.  My good finish in race 2 put me further back, but I got cut up on the inside of the first turn, taking a big dent in the front wing, and ended up near last by the time I recovered.  When there is contact you just hear an almighty bang, such is the booming effect of no interior.  You have no idea how big or small the damage is. No radio for someone to tell you and I don't have anyone in the pit lane for me most of the time either.  The answer is just to get on with the race is if nothing happened.
I did drive fairly cautiously after though,  about a second a lap off my fastest pace not wanting any further incidents or to end up in the gravel like last time. A bit like Rockingham disappointment in the final race, but really showing we can live with the front runners in qualifying and racing.

For brands hatch in. August we need a new front wing and hope to have more front camber for a track I love and know well.