We made the trip up to Corby to the Rockingham Speedway for our first event of the 2015 season. The outer paddock is not the most glamorous of places on the BRSCC Calendar, but we made do, setting our trailer down alongside some of the other drivers who run with race trucks and awnings.  Many had tested the day before, but were remaining tight lipped about how they'd got on!

Scrutineering completed without a hitch  which is always good.  And at 10:30am on the Saturday we headed round to the infield section and out onto the track for 20mins of Qualifying.

I immediately realised something was not right with the engine.  Erratic idling in the holding area escalated to hesitation every time I went between 5000-6000 RPM.  Intermittent at first, I headed back to the pits as red flags came out for an accident.  A quick chat in the pits decided there was nothing we could do, and with the track back open I headed back out.  Using a higher gear round some corners and gingerly taking the banked oval track section (usually flat out at 110mph) I qualified 11th 2secs off my expected pace.
Back in the paddock we immediately found the airbox was broken causing erratic air flow past the Mass Air Flow sensor (MAF).  An extra jubilee clip solved the problem and will ensure it doesn't return.

Feeling confident that the car was now running fine and with a slight suspension tweak to dial out some over-steer I went out for Race 2 on Saturday afternoon.

I climbed 3 places on the opening lap.  A couple of cars spun off under pressure, falling to the back, whilst another two collided bringing out the safety car.  Running in 4th place, eying up a first ever podium, I spun up the rear tyres too much as the safety car pulled off and this led to loosing a place a lap later.  A three-way battle for 3rd place finished with me reclaiming 4th for my best ever finish. 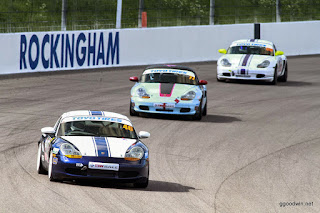 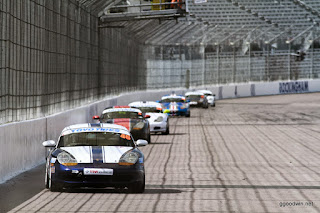 A great social event and BBQ was put on that evening in the paddock before we headed off to the hotel.

On Sunday I had to add the obligatory "Championship Success Ballast" which was 20kg's for my 4th place finish.  This took me to 50kg's over the minimum weight so I still need to lose some more from somewhere. 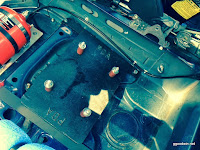 The two races didn't quite go to plan.  A poor start in Race 2, left me high on the outside of the banked first corner.  Another car tried to go higher in my blind spot and we collided as the pack of cars ran out to the wall of the track. I got lucky with a slight dent and an unbalanced wheel, whilst the other car sustained lot of damaged with the wall.

The final race started reasonably, although I lost a lot of places off the grid (reversed so I started 2nd).  Then on lap 2, my brake pedal went solid and I careered off into the gravel for a rare DNF.

A weekend of highs and lows.  Another situation where we managed to resolve technical problems with the car ourselves.  On the down side we absolutely need to fix the power steering pump which continues to leak, and likely also need the alternator replaced (potential cause of ABS failure).

Two outstanding additional performance modifications are also overdue; GT3 suspension arms, which will increase corner grip plus the under-drive pulley to slow the ancillaries and increase power a little.

Next race for us is Donington Park in July.