Donington Park in the East Midlands was the final event of the season.  A triple race schedule with the added twist of a reversed grid for the final race.

Having not done any changes to the car since Brands Hatch, we arrived early Saturday and set about changing the car setup (roll-bar stiffness and damper settings) to suit the fast and flowing Donington track. We also swapped our worn wheels/tyres for the spare ones which we bedded in at Brands. 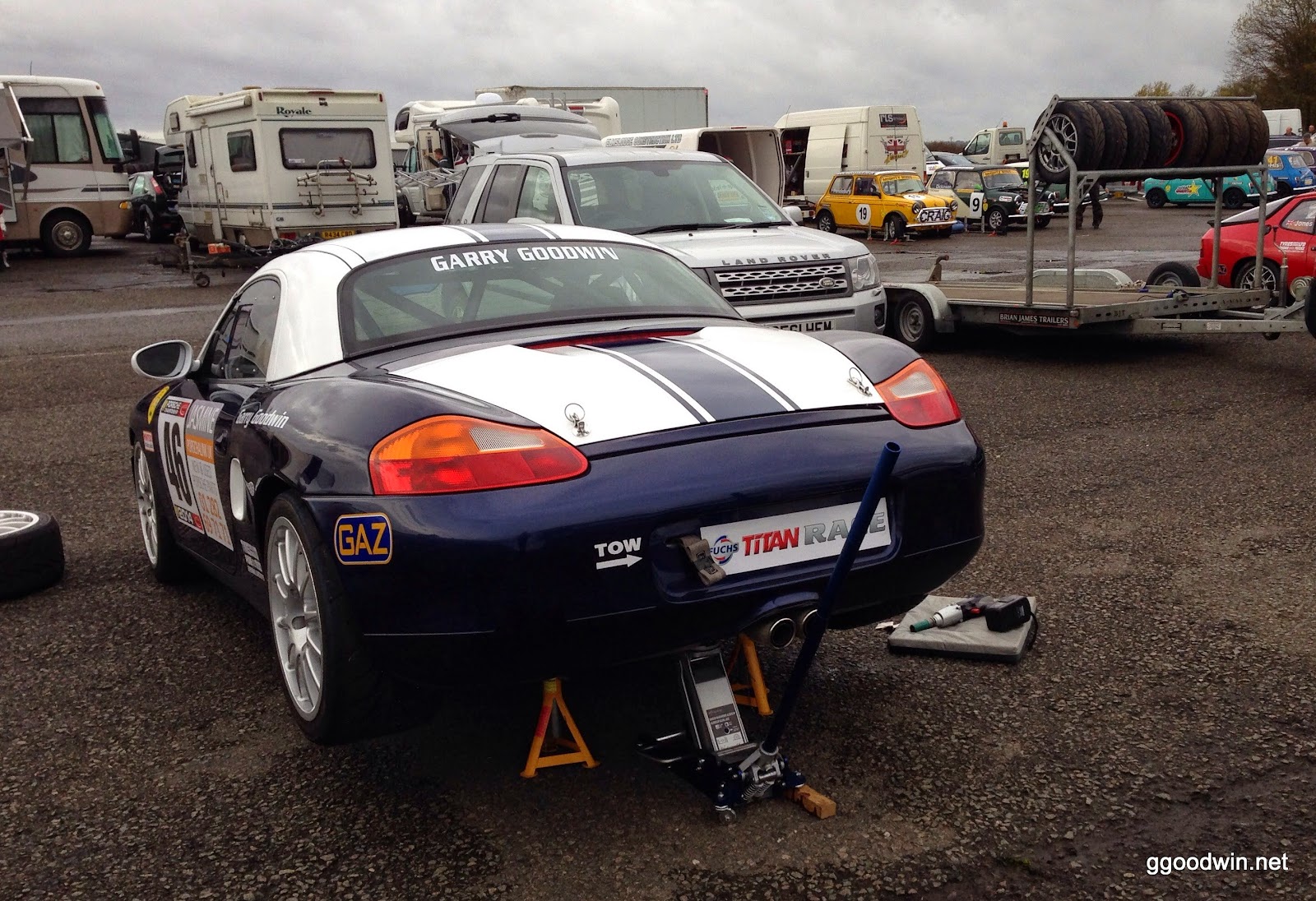 Qualifying wasn't until 12pm, so the track had dried from the early morning rain by the time we went out.  I needed a few laps to re-aquaint myself with the circuit and then stopped in the pits to check tyre pressures.  It was warm, and they were already getting too hot, so a few PSI was let out of each corner.

I'd already gone faster than ever previously and my lap timer twice showed another half second improvement in the session, but a mistake and a slower car late in the lap meant I qualified 9th.  Back in the paddock, I decided the car was still over-steering a little too much, so before the race we sorted this by adjusting the ride height before the first race. 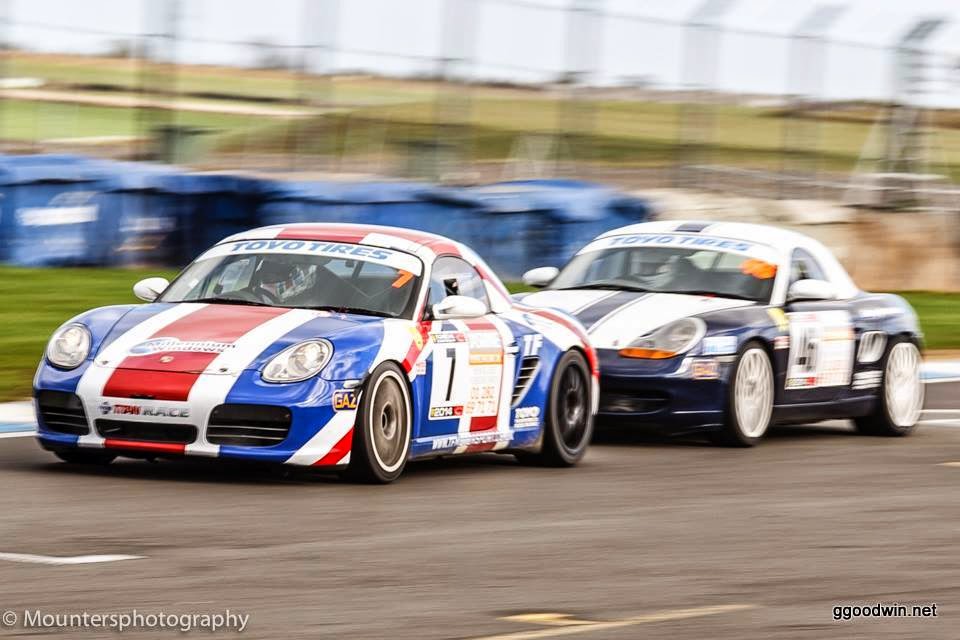 Paranoid about my recent bad starts, I was really cautious getting away.  I lost a couple of places and was overtaken by a production spec Boxster.  Handily I blasted straight back past on the next corner, and set out following the main pack of cars.  A mid race safety car for two 924's in the gravel setup a 10min blast to the finish. Two cars I was battling with skidded off under pressure.  I avoided t-boning one by centimeters!  I finished 9th, not an amazing place, but the car was handling really well and I was confident overtaking cars for position. 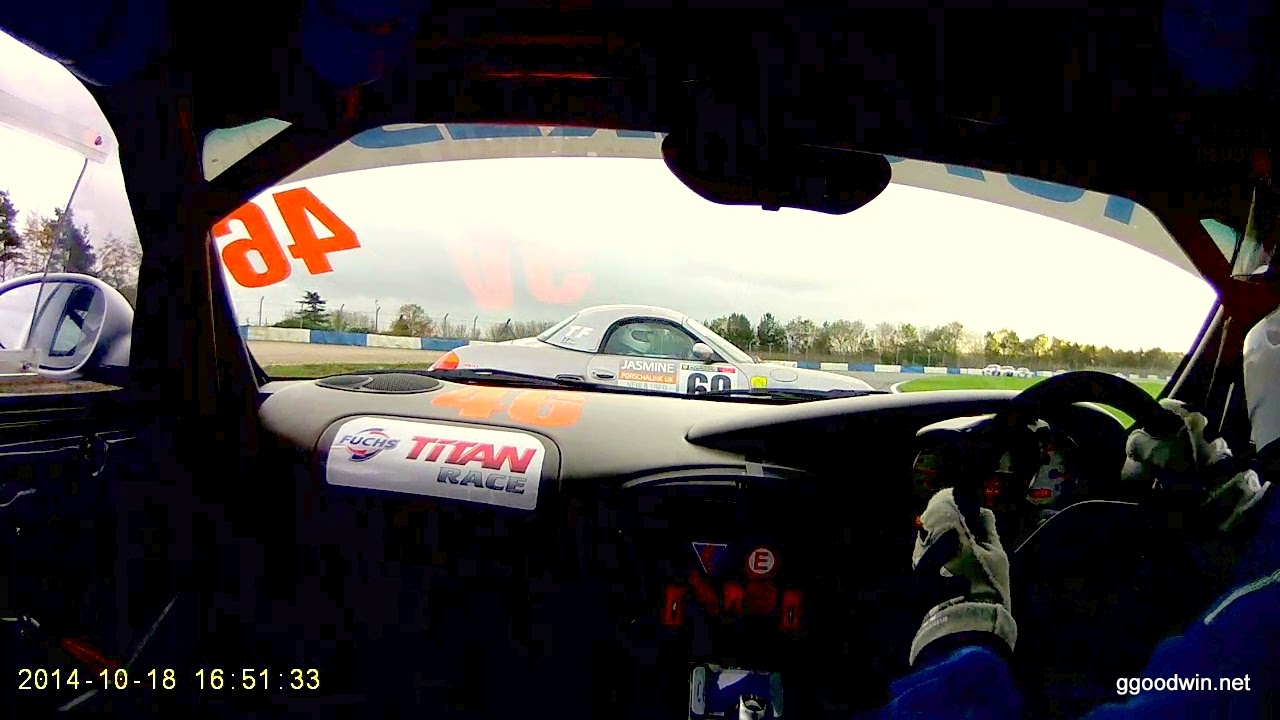 Race 2
I maintained position from the start, and whilst not quite able to keep up with the front 6 or 7 cars, they were only a few seconds ahead and not getting away. Mid way through the race I came across two 924's rejoining in the middle of the track after a spin.  I had to take avoiding action at over 90mph to prevent hitting them.

Breathing a sigh of relief, I descended Craner curves to a Boxster rejoining from the grass, and then my car went sideways.  I only just managed to control it and didn't loose a place either.  Only then did I see the trail of fluid which had been the cause of all the issues, coming from the rear of a Boxster ahead.


I now found myself in 6th place, but in the remaining laps I noticed my lap times slowing and a gaggle of cars behind definitely closing in. The last lap board finally came out but I lost a position into Redgate. Determined to get it back, I stayed wide and slingshot back past into the Old Hairpin, where I knew I could out brake.

However up the hill I stayed too far on the inside which ultimately compromised my exit speed onto the next straight and I lost the position on the penultimate corner to finish 7th.  My best race result since the start of the year at Silverstone.
After the race I found the demanding braking had worn the front brake pads to almost nothing.  A quick chat with the series parts suppliers Jasmine Porcha-link and I was ready for race 3 which some improved braking. 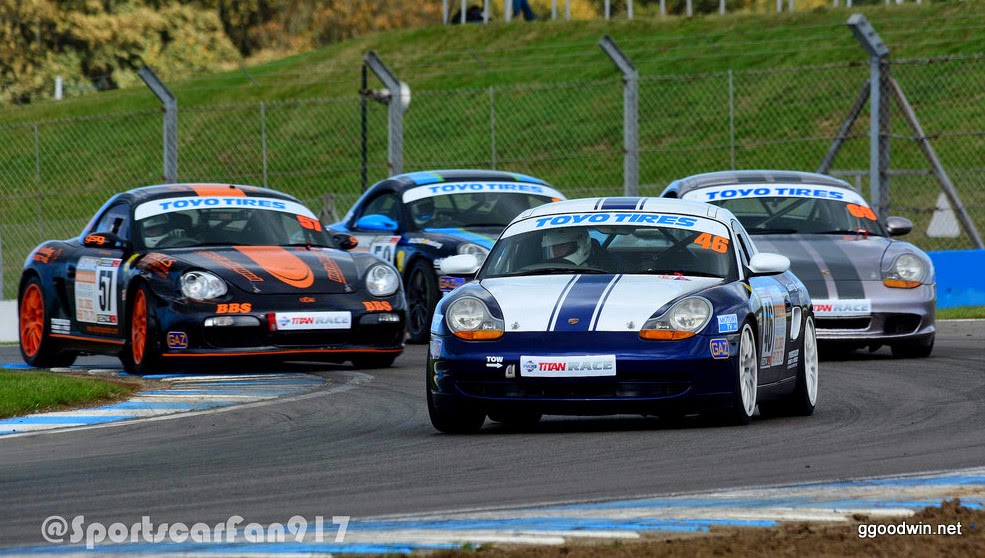 Race 3
Reverse grid is always fun.  The aim is to stay at the front for as long as possible before the leaders ultimately overtake you.  Starting on the 3rd row would give the that opportunity.
I worked hard on the green flag warmup lap to get my tyres warm and bed the new front brake pads in.  A few might stops from 100mph plus does the trick.
I had a minor panic on the grid as the car had popped out of first gear.  The rule is to get into first on the approach to your grid slot and leave it alone!  But your mind plays tricks and you can't help messing with the gear stick whilst stationary.

I got away well enough though, but was boxed in behind the slower cars in front as I approached Redgate corner.  At the last second a gap to the inside appeared and I darted though and into 3rd place.

I could see I was faster than the 2nd place car and keeping ahead of the faster runners behind me.  On lap two I lined up a block pass into the Coppice corner to take 2nd, but this compromised my speed down the straight and a car got on the inside. 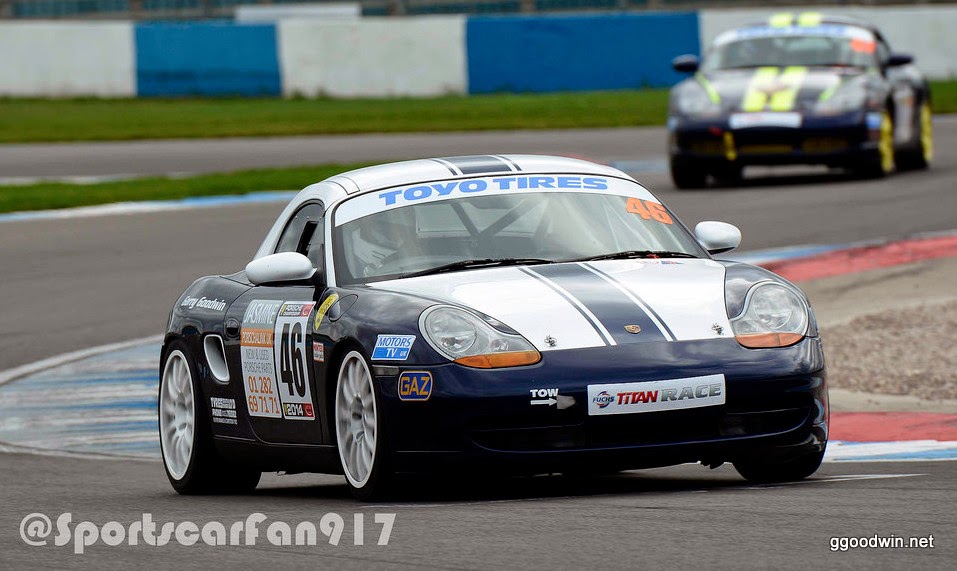 As we approached  the braking zone I braked late as usual....the pedal went solid and I careered on towards the gravel!  I managed to slew the car sideways across the gravel and out the other side in a big arc to get back onto the track.  Another car was left in the gravel as I rejoined and I had no idea what had happened.

It wasn't until the lap after that I saw oil flags and thick streak of oil exactly where I braked.  The vibration of gravel stuck on the wheels made it impossible drive at normal pace, but I continued for a while, dropping from 6th to 10th.  With 5 minutes of the race remaining, I noticed something else was wrong, the engine was now running rough and down on power. Then I had smoke coming into the cab, so hastily parked it on the unused Melbourne loop.

Despite only our second ever DNF out of 30+ races, I had a fantastic weekend on a track where I really found confidence to push the car and my driving.   The car I left in the gravel finished 5th in the end which meant had I stayed on track I should have got a best ever result.
The highlights of the weekend being  lots of overtakes and a few hairy moments, which cement Donington Park as my favourite track.