We arrived at Donington Park late Friday evening and unloaded into a Pit Garage.  We'd hired a different trailer this weekend and found out too late that you cannot open the car doors due to the high wheel arches.  This meant climbing in though the roof to get the car off the trailer which was entertaining.

Qualifying (Saturday 11am)
The track was wet from overnight rain and the single seaters before us were out on full wet tyres kicking up spray down the main straight.  I expected it to dry out, and my lap times increased throughout the session as a dry line appeared in places. Everyone went fastest on the last lap, but I was hampered a little by traffic so could have gone quicker. I qualified 12th.
Race 1 (Saturday 4pm)
I got a decent start off the line but several cars jumped the start, rolling before the lights went out. As I rounded the first corner (Redgate) the cars in front suddenly all swerved left (to avoid a spinning car). I had to take avoiding action, ending up with two wheels in the gravel and two in the mud verge going nowhere fast.  By the time I rejoined the circuit I was almost dead last.

The 20 min race saw me pass all of the 924 runners, the two production boxsters and catch the race spec boxsters. There were no blue flags to help as we were racing for position. I crossed the line side by side with 13th place (0.2 secs behind). Both of us gained an extra place when the jump start penalties (10 secs) were applied.

After the race we noticed the exhaust was sounding pretty rough. On stripping the bumper off we found the lambda probe had corroded and blown out of the catalytic converter leaving a 50p piece size hole.  With the help of Tony from Southshore Tyres we managed to weld it back on, racing with a blowing exhaust.

Race 2 (Sunday 12pm)
Having rained in the morning the track was still wet for our 12pm race.  I knew it would dry quickly so set dampers fairly stiff, mindful it would be slippy off-line.

The race was red flagged at 2/3 distance and restarted for an accident. I finished my best ever in 6th having great battles with other cars for that position in both parts.  The car handled really well and my driving was quite smooth - although my lap times were 1 second slower than 2012.
Race 2 - Part 1 Video / Race 2 - Part 2 Video

Race 3 (Sunday 4pm)
With confidence high we stiffened roll bars and dampers for the last race which was a reverse grid (starting 8th in boxsters).  Just before we went out a torrential downpour soaked the track so we hastily changed to a wet setup.

On lap 1 visibility was almost zero from spray and I got stuck behind a train of cars whilst faster cars overtook all of us. On lap two I used the wet race line with good effect to take 3 places back and open a big gap. I was now in 6th place.  A car spun on the oil immediately in front of me resulting in a very close call.


I eventually got caught on the last lap - finishing a very happy 6th place again!
Posted by Garry

With no Friday test being offered by Donnington Park we chose a Bookatrack trackday the week before our race weekend to get some practice laps in.

At a first glance Bookatrack look a little more expensive that some other track day operators.  However their approach is to limit the no. of cars taking part (up to half of other track days) which ensures you get maximum track time from the day.

The day was well really run, with a mix of race,track and supercars all behaving on track in pretty tricky wet conditions.  Persistent rain for most of the day threatened to close the track at times as rivers of water flowed across the tarmac in several places. 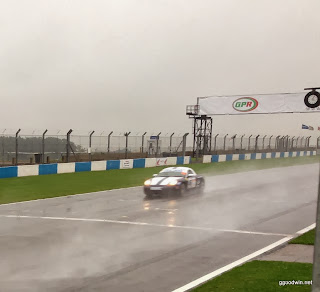 We used the day to asses wet weather handling at different tyre pressures and damper settings.  We also experimented with different race lines.  Overall we improved our times by 4-5 seconds by the end of the day in worsening conditions.

We also tested out a new hardwired Blackvue camera to meet a newly introduced championship regulation (mandatory in car camera recording). This records whenever the ignition is on saving us the aggravation of usb charging, memory card management and forgetting to press the record button!