As usual it was an early start on the Saturday. We arrived at the paddock entrance just behind our race car which was being towed separately and found space in the paddock.
There was only just time to unpack the car before we need to head over to scrutineering, remembering I had to sign-on at the office on the way. 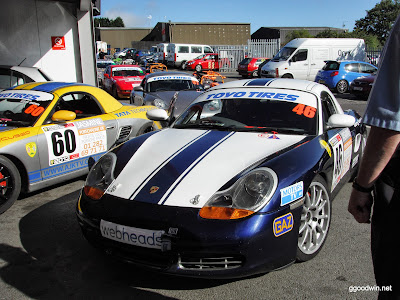 The cars queue through scrutineering where the saftey features of all cars are checked. Seats and belts must be firmly mounted and in date. Lights and safety cut-off switches must work etc. They also check my race suit, boots, gloves and helmet for condition and the right safety markings.  All my gear is FIA standard and equal or above that needed for UK club motorsport.


Qualifying - Saturday AM
A long queue formed early.  With 30 cars on the short 1.2 mile Indy Circuit everyone wanted to be out first.  I got some clear laps by being last out of the Boxsters with only a couple of 924's to clear on my out lap. Almost every other lap you came across traffic though. I qualified 13th, not quick enough, but happy to be around 1.5 seconds a lap faster that the year before when I was battling 924's and without any incidents.

Race 1 - Saturday PM
We softened the rear roll-bar from the Snetterton setup as I was struggling in the tight corners with understeer and squealing tyres in qualifying.  We also reduced tyre pressures as the outside temp got up to 25 degrees. We know tyres heat up during a race and are looking for 26-28 psi when hot. Any higher and the tyres start to loose grip with car sliding about more under braking and in corner exits. 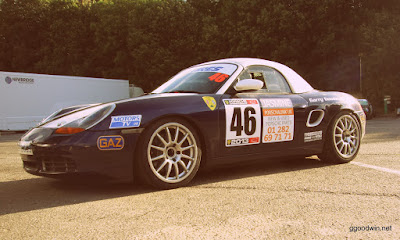 On the grid I had to balance the hand-brake, accelerator and clutch as the middle rows slope downwards temping a false start. (Or stalling as the car next to me did!)

I got away OK, but was too wide round Paddock Hill and too cautious on lap one. There was a lot of pre-race warnings about damage, the need for good driving standards and my caution lost me a couple of places around the Druids hairpin. 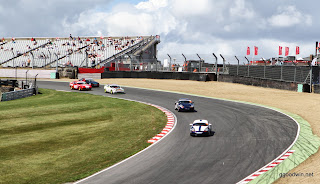 After 3 or 4 laps I was dropped by the mid pack of racers and was racing alone. I had to keep pushing though as a couple of spinners in front got me one place back, finishing a reasonable 12th and improved my fastest lap of the weekend so far by half a second.

Race 2 - Sunday AM
I again started well holding position. I gave a place up round paddock hill on lap 3, but the driver went into the gravel on the next lap pushing too hard. Then another spinner bought out the safety car, allowing everyone to bunch up again. 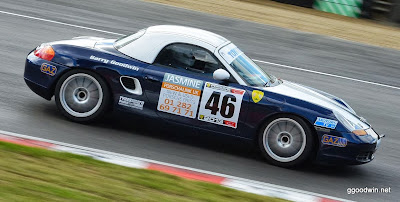 After the restart I was able to stay with the cars in front, who were all navigating back markers within a couple of laps.  I saw a gap to nip past 10th place at along the short Cooper Straight when a wheel was put on the grass, however being a more powerful 987 model it blasted past on the pit straight and I couldn't get back underneath at paddock hill bend to hold the place on the brakes.  I finished 11th after a great race and and once again went faster and put in more consistent fast laps.

Race 3 - Sunday Late Afternoon
I was tempted to change the car setup prior to this race.  I had been interviewed by the AJK TV crew and stated I needed to find another half a second per lap to get amongst the mid pack of cars.  In the end we decided to brake more gently for Paddock Hill and attempt to carry more speed around the corner, more smoothly, and be on the power earlier.

I held position after the start, but had a faster car/driver harrying me around the first 3 laps.  When he moved to the inside I had to yield at Druids Hairpin to avoid any contact.  Once behind however the tables were turned.  Whilst I was always loosing out on the pit straight I was faster by trail-braking around Druids and being hard on the gas through Surtees & McLaren.
I posted 6 laps back-to-back all around the 56.5 seconds lap-time mark and slowly reeled in the car in front. There was a moments hesitation overtaking a back marker and I went passed with two wheels on the grass on the outside of Graham Hill Bend.
I immediately opened up gap and then managed it to the end of the race to finish a very satisfying 10th.

Summary
This event saw not my fastest driving in terms of finishing positions, but definitely my most consistent and smoothest driving in the two races on Sunday.  It took that long to get used to the track again after a year away, which is the benefit of testing or having a recent track day under your belt.
Posted by Garry