A Wet Race at Silverstone

Going to Silverstone was always a bit of a gamble. With no time to test, and having never even visited the place, let alone done any laps I would have to learn the track during qualifying.

We arrived early Saturday morning, taking up residence in the large Garage.  We took advice from South Shore Tyres to stick with our 3/4 worn Toyo 888's despite the threat of rain.  Qualifying was dry and I had clear track to start, however lacked confidence (which comes from track time) to push harder through the fast corners.

Unfortunately I then picked up damage to the side of the car passing a 924 and was later accidentally bumped from behind by a faster Boxster.  I qualified 12th - disappointed not to be faster (2 seconds off my target time) and about the damage we had sustained, albeit cosmetic.  On checking the car after Qualifying we found one of the front brake pads we in back-to-front e.g. metal backing plate on the brake disk, which obviously did not help, but was easy to fix. 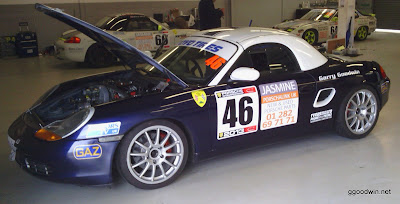 By mid afternoon it was raining heavily and despite interludes the track was very wet. We softened the dampers a few clicks all round and added a couple of psi to the tyre pressures for our race at the end of the day.

I found grip from the tyres was good....in a straight line and got a really great start, passing three cars by the first corner.  Three more cars spun in front during the first 2 laps and I was able to keep pace with the battle ahead. I overtook once and got alongside a couple of times but could not hold the place.

Car control in the corners was difficult with too high entry speeds washing you wide and anything other than a delicate right foot kicking the back of the car out. I finished a very competitive 8th - A great result.

On Sunday afternoon rain was forecast and visibly getting closer, but we stuck with stiffening our suspension from qualifying to reduce over-steer tendency.

It started to rain as we took to the grid.  My start was good but after a couple of laps I couldn't keep pace with the mid pack of Boxsters and lapped incident free, mostly on my own to the chequered flag.
The car felt better and looking at my speed at reference points on track combined with my lap timer I was able to increase performance through Copse corner particularly. I beat my dry qualifying lap time by 0.6 seconds despite the light rain conditions. An improvement of 1.5 seconds in real terms.